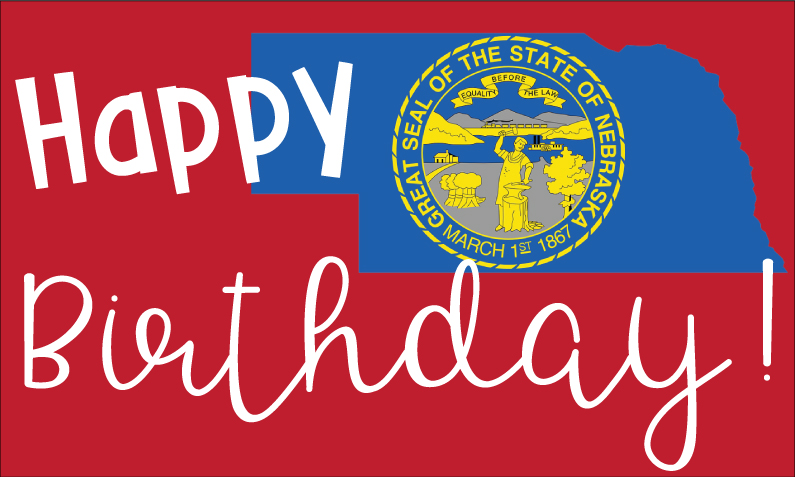 March 1st is Statehood Day in the state of Nebraska. We will be celebrating 152 years since officially becoming the 37th state on March 1, 1867!

I moved to Omaha, NE, for my first teaching job back in 1995. My assignment was 4th grade. The biggest part of the Social Studies curriculum for 4th grade is to teach Nebraska History. I had just moved to Nebraska, living here for only 2 months. Omaha was the only part of Nebraska I had ever been in! If you are familiar with a Nebraska map you will see that Omaha is on the extreme east side of the state, you don’t even need to drive through other areas of Nebraska to arrive in Omaha. You head over the Missouri River (Iowa border) on I-80 or I-29 and go directly into Omaha. So needless to say I did not have one bit of background knowledge of the state of Nebraska or its history!

In addition to a lack of personal experience, the district gave me ZERO resources to use to teach this curriculum, no textbooks, no informational books, no teachers manuals, nothing, zero, zip! So to say I really was not qualified or prepared to teach this required Social Studies curriculum is an understatement!

I made it through that first year, how I’m not quite sure? I learned about Nebraska right along with my students. The second-year I was able to start to refine resources that I created and by the third year, it was looking even better. The silver lining of the experience is that by being given nothing I was able to refine my creating skills and have been able to utilize those skills with my The Teaching Bank adventures!

When my son was in 4th-grade his teacher contacted me asking if I had any resources to help with her Nebraska Unit. I enjoy sharing my resources with my children’s’ teachers and her email sparked an idea to create a product line using the materials I had created for my own classroom. I would have been in heaven to have something like this available in my first year teaching! So with that my Complete Nebraska State Study Interactive Notebook Unit, was born!

I do understand that this product doesn’t have the widest audience, mainly Nebraska teachers! I created it with 11 distinct sections so that can be used in isolation or as a full year curriculum so that teachers can pick and choose to fit their needs. This also gave me the opportunity to offer the Lewis & Clark section and The Oregon Trail section as separate, stand-alone items to market to the wider US audience. You don’t have to be a Nebraska teacher to use either of those!

The unit is broken into the following sections:

Section 5: Native Americans of Nebraska, covers the tribes of Nebraska, the study of an Earthlodge, Earthlodge vs. Tipi comparison, and investigate the many uses of the bison.

Section 6: Lewis and Clark, covers the location and exploration of the Louisiana Purchase, map the journey of Lewis & Clark, investigate supplies needed for the journey, a timeline of the journey, journal the journey, and impact of the exploration. *This section is not Nebraska specific and can be used nationwide!

Section 8: Nebraska’s Road to Statehood, covers Nebraska’s road to statehood, including activities for the Kansas-Nebraska Act, the Homestead Act, housing on the prairie, life of a pioneer child, the impact of the railroad to NE, and NE becomes a state.

Section 10: WWII and the Cold War, includes 2 informational articles along with activities touching on Nebraska’s role in World War II, the Cold War and the role of SAC and STRATCOM.

All sections come in a printable Interactive Notebook format, a quick IntelliNotes™ format, and a digital Google Drive™ format. 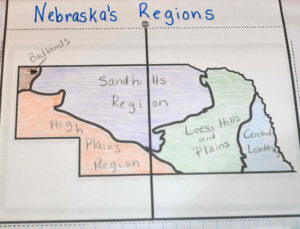 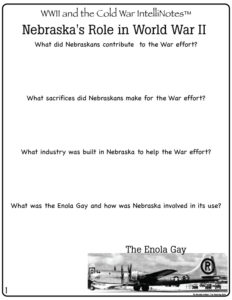 Also included in each section is an informational slideshow to aid in instruction.

Click here to try out a sample activity from the unit.

All of these sections are available on their own so you can tailor it to your own classroom needs. You can also buy the entire unit together as one bundle at a reduced cost. 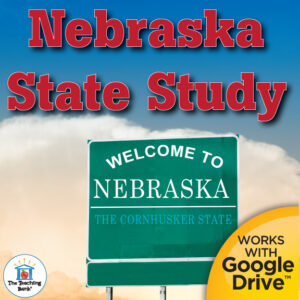 This can save you money and it includes everything you need to teach your entire state study for Nebraska. The alignment to the newly adopted 2019 Nebraska 4th Grade Social Studies State Standards is included with every section to make planning even easier!

In creating my resources I made a conscious effort to use only historical images and clip art. I know there are a lot of resources out there that utilize cutesy type clip art in their history products with a goal to entice children into thinking it is “fun”.  I don’t subscribe to that line of thinking, especially when dealing with topics such as war, slavery,  genocide, or in the depiction of indigenous people, enslaved people, or immigrants. I feel very strongly that using cartoonish imagery sends the wrong message to students preventing them from seeing the people and events as real and serious in nature.

You don’t have to make these topics “fun”, but you can very easily make these topics interesting through deep discussions.  Children are naturally empathetic and tolerant. It is a perfect time to tap into that empathy and tolerance as they learn of the atrocities of the past. This doesn’t need to be sensationalized or cutesy, these discussions of the events of the past taught in an honest and real depiction will engage the student interest. The deep discussions you have as you learn together will spark an understanding and appreciation for what has come before and hopefully will lead to the goal of learning this uncomfortable history, which is not to repeat it.

I hope this product can be the lifesaver for you that it would have been for me back in that first year of teaching! This covers everything that you need for the Nebraska study in an interactive way. Your students will be motivated, involved, and at the end have their very own Nebraska State Guide!