The Travels of Bud, Not Buddy 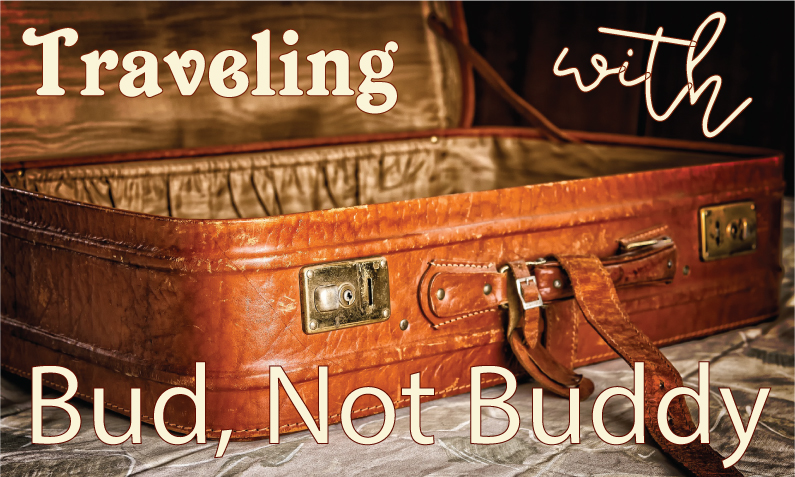 Bud, Not Buddy, written by Christopher Paul Curtis, is a wonderful book to use for a novel study or literature circle, or book groups in the classroom. Bud, Not Buddy, was published in 1999 and received the Newbery Medal for children’s literature in 2000. Author, Christopher Paul Curtis, was also recognized with the 2000 Coretta Scott King Award, an award given to outstanding African American authors.

Summary of Bud, Not Buddy*:

It’s 1936, in Flint, Michigan. Times may be hard, and ten-year-old Bud may be a motherless boy on the run, but Bud’s got a few things going for him:

He has his own suitcase full of special things. He’s the author of Bud Caldwell’s Rules and Things for Having a Funner Life and Making a Better Liar Out of Yourself. His momma never told him who his father was, but she left a clue; flyers advertising Herman E. Calloway and his famous band, the Dusky Devastators of the Depression!!!

Bud’s got an idea that those flyers will lead him to his father. Once he decides to hit the road and find his mystery man, nothing can stop him – not hunger, not fear, not vampires, not even Herman E. Calloway himself.

*(from the book jacket)

This is a great Depression Era novel to use in the classroom to help students understand the struggles of the era, especially as an African-American youth, and to see how perseverance will overcome adversity.

I offer a complete novel study to accompany Bud, Not Buddy for use in the classroom or homeschool. The unit includes both a printable format and a Google Drive™ format for use in a paperless classroom or with Google Classroom.

See what people are saying about the Bud, Not Buddy Novel Study by The Teaching Bank!

This is a great novel to accompany a study of: