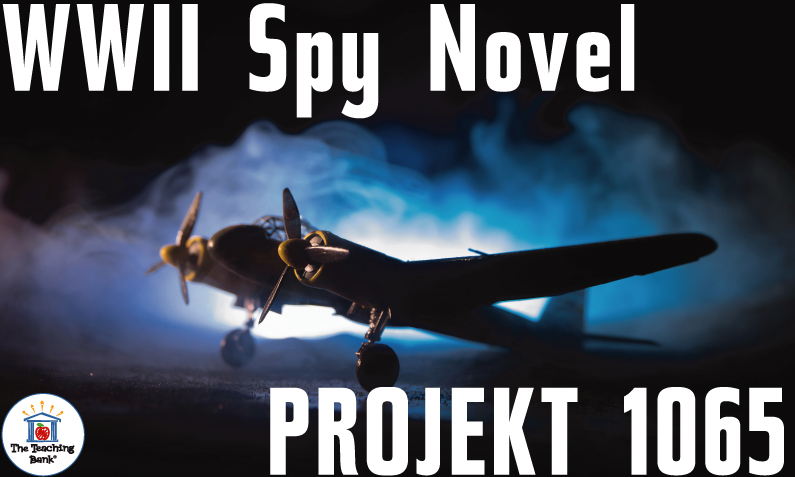 Projekt 1065 by Alan Gratz, is an exciting, “can’t put it down”  WWII spy thriller. This historical fiction is a great novel to use in your classroom or homeschool for a whole class novel study, small book groups, or individual book studies to complement a WWII study.

This novel will introduce your students to the countries that were neutral in WWII and countries such as, Ireland, which were secretly fighting behind the scenes with the use of diplomatic spies placed in Nazi Germany while claiming neutrality. Your students will learn about the Hitler Youth, Kristallnacht, Operation Paperclip, The Manhattan Project, and get a taste for why the German people were so fearful of the Nazis that they turned on each other and allowed Hitler to come to power.

From the Book Jacket:

Infiltrate. Befriend. Sabotage. World War II is raging. Michael O’Shaunessey, originally from Ireland, now lives in Nazi Germany with his parents. Like the other boys in his school, Michael is a member of the Hitler Youth. But Michael has a secret. He and his parents are spies. Michael despises everything the Nazis stand for. But he joins in the Hitler Youth’s horrific games and book burnings, playing the part so he can gain insider knowledge. When Michael learns about Projekt 1065, a secret Nazi war mission, things get even more complicated. He must prove his loyalty to the Hitler Youth at all costs — even if it means risking everything he cares about. Including… his own life.

I offer a complete novel study to accompany Projekt 1065, which includes informational WebQuests to learn more about the Sturmabteilung (SA), the Gestapo, Kristallnacht, Operation Paperclip, and The Manhattan Project for use in the classroom or homeschool. The unit includes both a printable format and a Google Drive™ format for use in a paperless classroom or with Google Classroom.

The School Library Journal describes it well, “While the book is replete with fascinating historical insight, Gratz has also crafted a suspenseful mystery that will keep readers on the edge of their seats. With short, action-packed chapters, it is a great choice for reluctant readers as well… A winning combination of action, suspense, and historical setting.”

This book will capture the attention of even your most reluctant reader with the fast-paced, action-packed story. Students will get a glimpse into the brainwashing and fear-mongering tactics that the Nazis used to gain power, and do it in such a way that will make it relatable to the middle-school mindset. It really makes kids think about the Holocaust and WWII in a way that makes them want to learn more. This novel study is great to use as a complement to a history unit on WWII and the Holocaust.

Are you interested in reading about and sharing ideas with other educators on using children’s literature in your classroom? My goal is to bring together teachers and homeschoolers who teach grades 3-8 and use novels with their students. I’d love for you to join me to learn, share, and grow together! Click here or the image below to join my Facebook group, Book Talk with The Teaching Bank! *The Teaching Bank participates in the Amazon Associate Program and earns a fee from qualifying purchases made on the Amazon.com site.